The Guide Outfitters Association of British Columbia is a strong supporter of The North American Wildlife Conservation Model.

In 17th century Europe, wildlife was closely managed by private land owners and hunting was an activity for the wealthy. For the early settlers, the New World seemed to promise unlimited resources and there were few constraints on the use of wildlife. As a result, by the late 1800s some wildlife populations were noticeably impacted.

Hunters and anglers began to advocate for a new way of looking at the use of natural resources that ensured sustainability for the future and the preservation of their tradition. The principles coming out of this movement eventually coalesced into The North American Wildlife Conservation Model. This model has been critical to the success of wildlife management throughout North America.

The Guide Outfitters Association of British Columbia (GOABC) is a strong supporter of The North American Wildlife Conservation Model. Guide outfitters have a rich tradition of sustainable hunting practices and are conservative in their use of wildlife. The role of the outfitter and hunter conservationist has helped many wildlife species. In British Columbia, successes from this model include whitetail deer, Rocky Mountain elk, Roosevelt elk and black bear. All of these populations were nearly extinct in the early 1900s, but are now healthy and growing.

In this book, editors Shane P. Mahoney and Valerius Geist, both leading authorities on the North American Model, bring together their expert colleagues to provide a comprehensive overview of the origins, achievements, and shortcomings of this highly successful conservation approach. 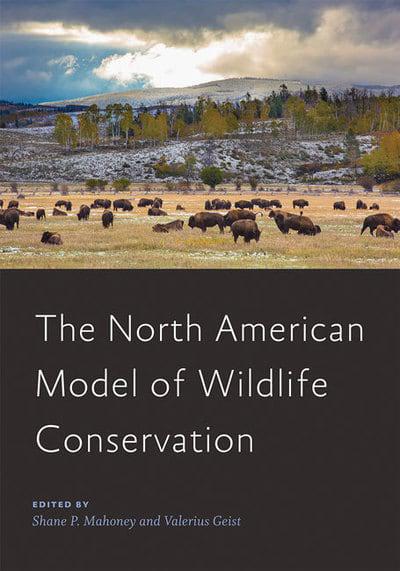 These are the seven pillars of the model:

Wildlife is a public resource.
In the United States and Canada, wildlife are held in the public trust and managed by government for the benefit of all people.
Eliminate the market for wildlife.
Strong laws and enforcement in the United States and Canada make it illegal to sell the meat or parts of any wild animal in North America.
Manage wildlife through law.
Hunters are allowed to harvest surplus wildlife. Laws and regulations exist to protect wildlife populations and ensure fair opportunity.
Hunting should be democratic.
In North America, every citizen has an opportunity to hunt and fish in compliance with the law. Hunting is not limited by private land owners or special privilege.
Wildlife should only be killed only for legitimate reasons.
There must be a balance between opportunity and regulation. Many states and provinces have laws and regulations protecting against the “wanton waste” of wildlife. In North America, the broad guidelines that restrain use are for food, fur and predator control.
Wildlife species are an international resource.
Wildlife management in one country will affect wildlife elsewhere. Working collaboratively, the United States and Canada manage land and wildlife to make sure that no country takes more than its share of the common resource.
Use science to guide wildlife management decisions.
Wildlife management based on population estimates and habitat research helps ensure stewardship and prudent decision-making.